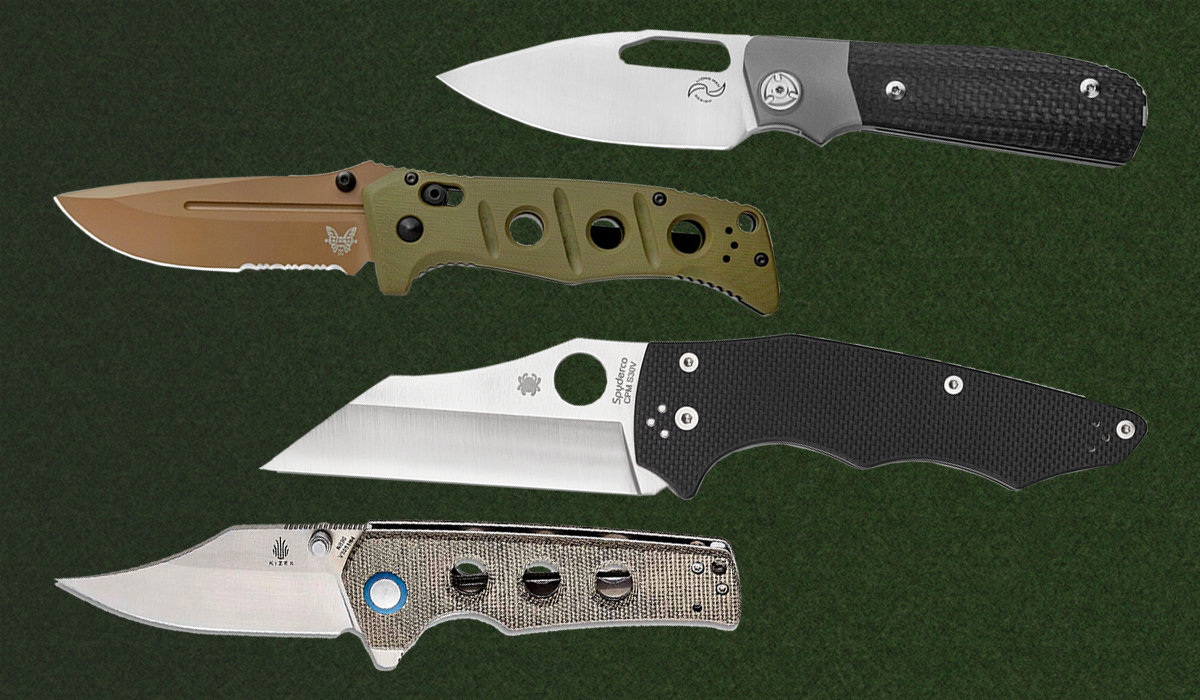 Backpacking knives are yet another category that’s a bit of a grey area, much like camping knives as we’ve covered in the past. That said, when you’re traveling with a heavy pack, whether for a single day or several, weight is a key concern. You’ll want something of reasonable size and strength to hack through anything that might get in your way, but also something light and easily manipulated, in order to manage food prep and other light tasks along the way. That in mind, we’ve focused on folding pocket knives for this list, in a range of sizes, blade shapes, and price points. 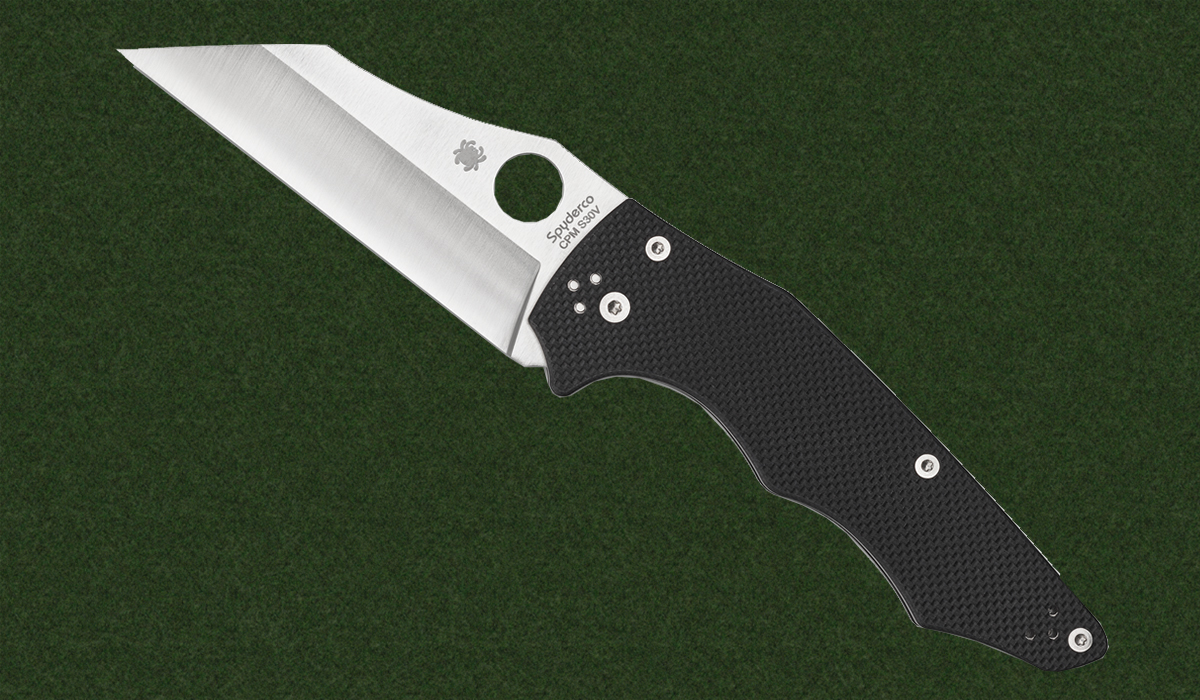 A new launch from Spyderco this year, the YoJumbo makes the list for best backpacking knives on account of its large tank-like construction coming from one of our go-to makers in the industry. Its 4-inch wharncliffe style blade means serious business, and thanks to Spyderco’s compression lock, it can hack away about just about anything without the slightest risk of failure. Its handles are made of grippy textured G-10, and it uses CPM-S30V blade steel.

Cons/Might be overkill for some 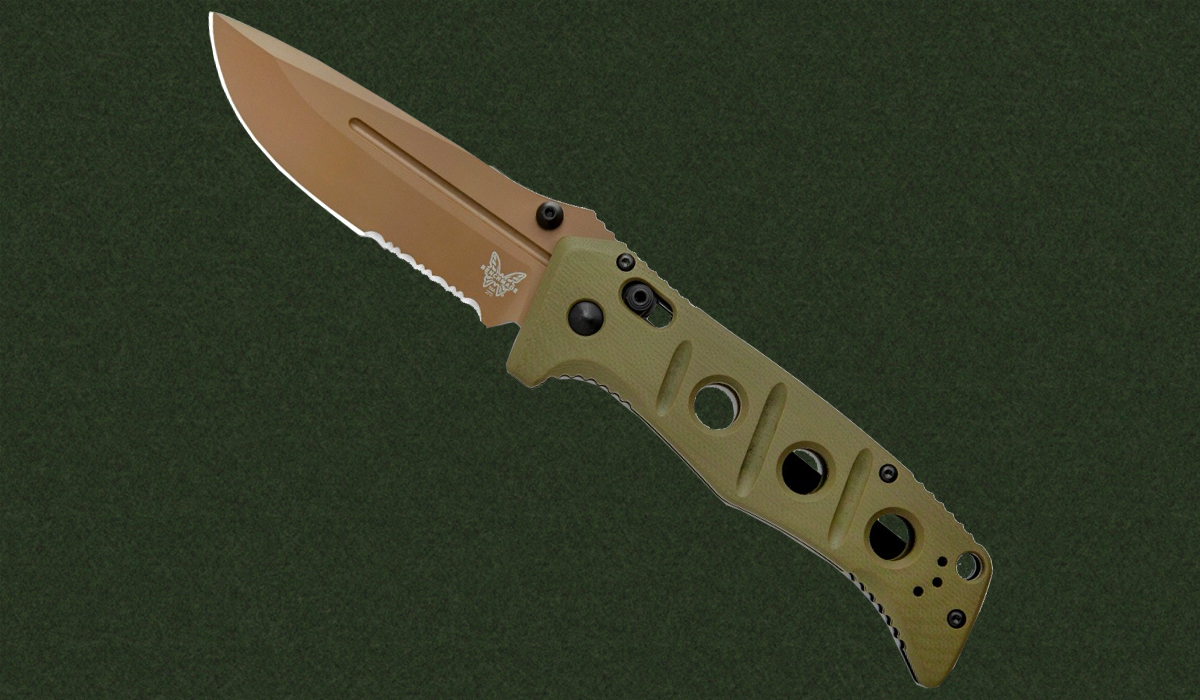 A beast of a knife, tied to a good cause

The Benchmade 275 Adamas is one hell of a knife on its own. Large, lightweight, ergonomically friendly, and fitted with Benchmade’s Axis lock system, it’s an easy one to call out for this list, though due to limited availability we picked the semi-serrated version here. The Adamas is number 275, because part of the proceeds of sale go to the Ranger Assistance Foundation—an organization created as a support network for the Army’s 2/75 Ranger Battalion. Said battalion was the one to scale the cliffs at Omaha and Utah beaches (depicted by Tom Hanks in Saving Private Ryan), and has since been deployed in countless high-risk operations in Panama, Haiti, and elsewhere around the globe.

The knife itself has a 3.82-inch blade, made of CPM-Cruwear steel, and has nicely contoured olive drab G-10 scales.

Bottom Line/Pricey but worth every penny 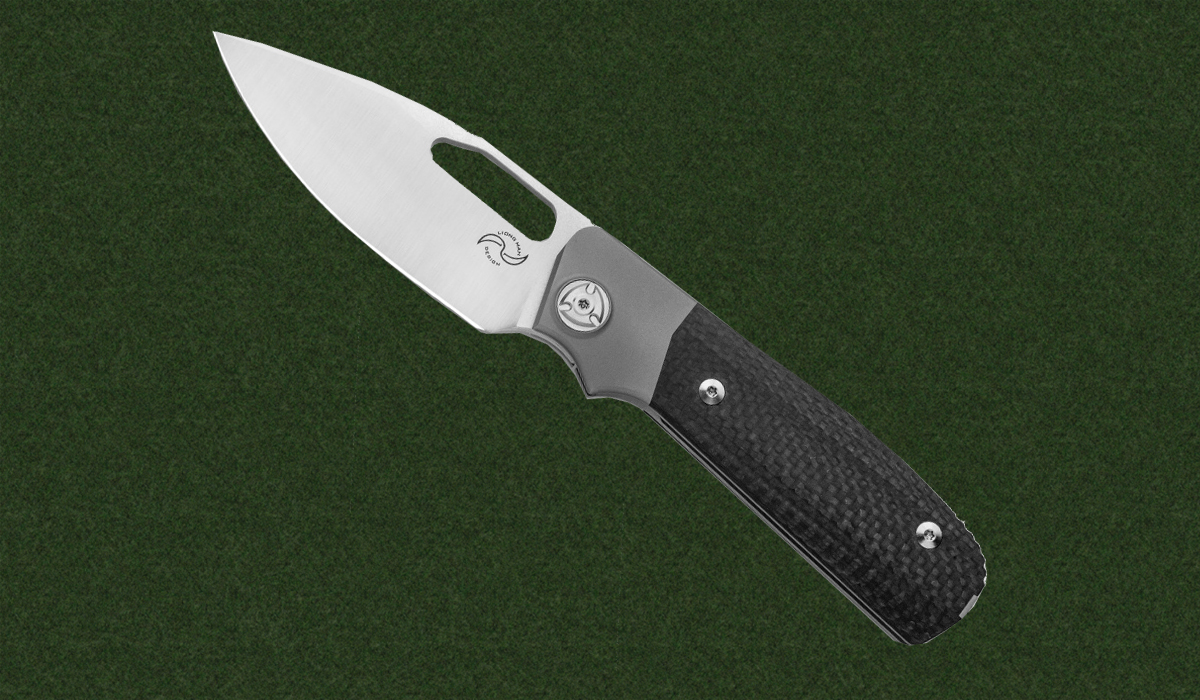 Liong Mah isn’t a household name, at least not yet. While the man has done a handful of affordable designs for CRKT, the production knives like this one that fly under their own name are built to a much higher spec by Reate. We’ve got another tank of a knife here in the form of the Field Duty, at 3.75 inches of blade length and 8.625 overall. Liong is no stranger to bigger knives, as his interest in the field goes back to his early days in the kitchen working as a pastry chef. That mentality of form follows function can be seen in his work, as much in the case of this field duty. Unlike most, it’s a high flat grind, though with a 0.14-inch blade thickness in Bohler M390 steel, it’ll be more than up to any task while backpacking. 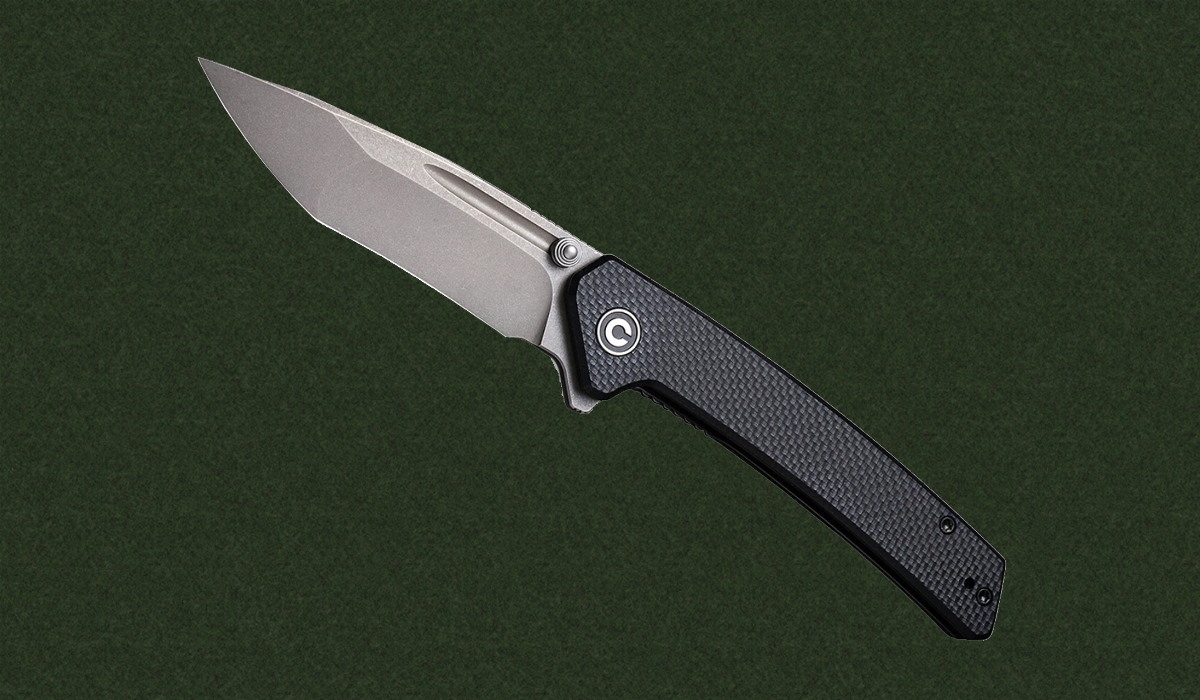 Still big, on a budget

Dialling it back a notch, knowing that not everyone is out to blow $200, $300, or more on a folding knife for their next backpacking trip, enter the Civivi Keen Nadder. Still large and in charge, and generally light in the pocket, the Keen Nadder has a stonewashed Bohler N690 tanto blade with a slight recurve measuring 3.48 inches, deploying via flipper tab or thumbstud depending on user preference. It has a relatively slim profile and a reversible deep pocket carry clip, and once again G-10 scales.

Pros/Big yet slim, lightweight, and easy on the pocketbook 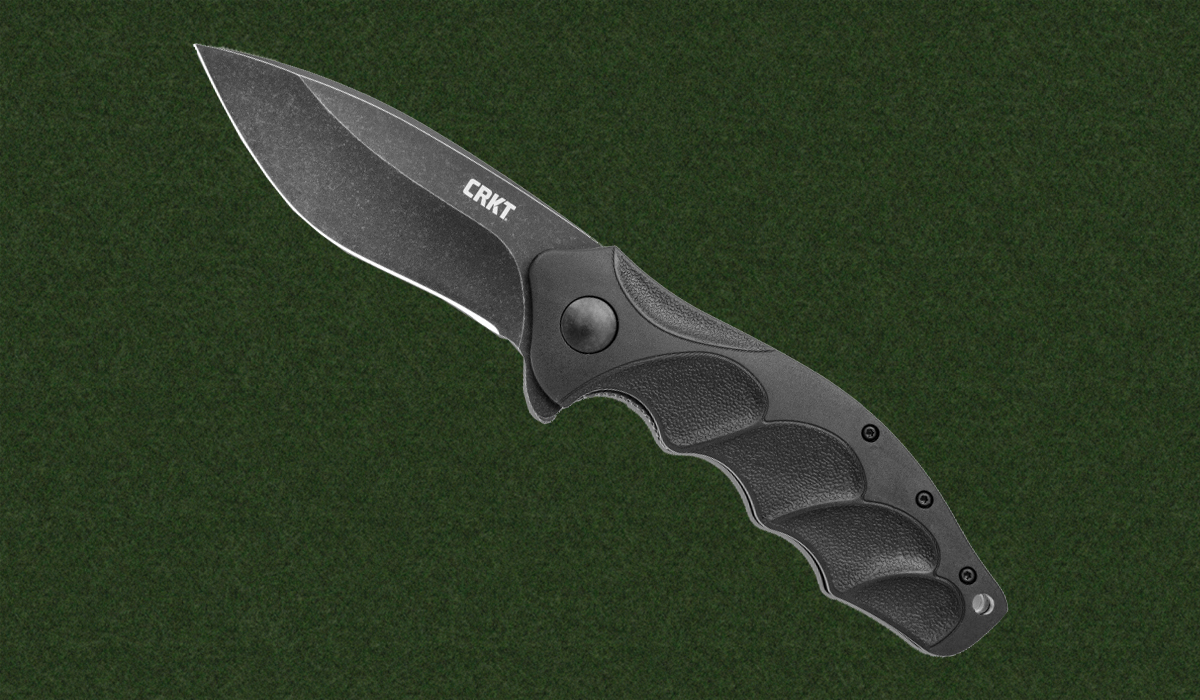 Grippy and assisted on a budget

The CRKT Foresight by Ken Onion is yet another rock-solid design that puts use and ergos first. Grippy finger grooves in its handles make it a treat in the hand, while its hollow grind drop point blade makes short work of cutting tasks. Its 3.5-inch blade is plenty to get the job done, and the combination of IKBS bearings and spring-assisted opening make it effortless to deploy in a hurry.

Bottom Line/Not bad for the money 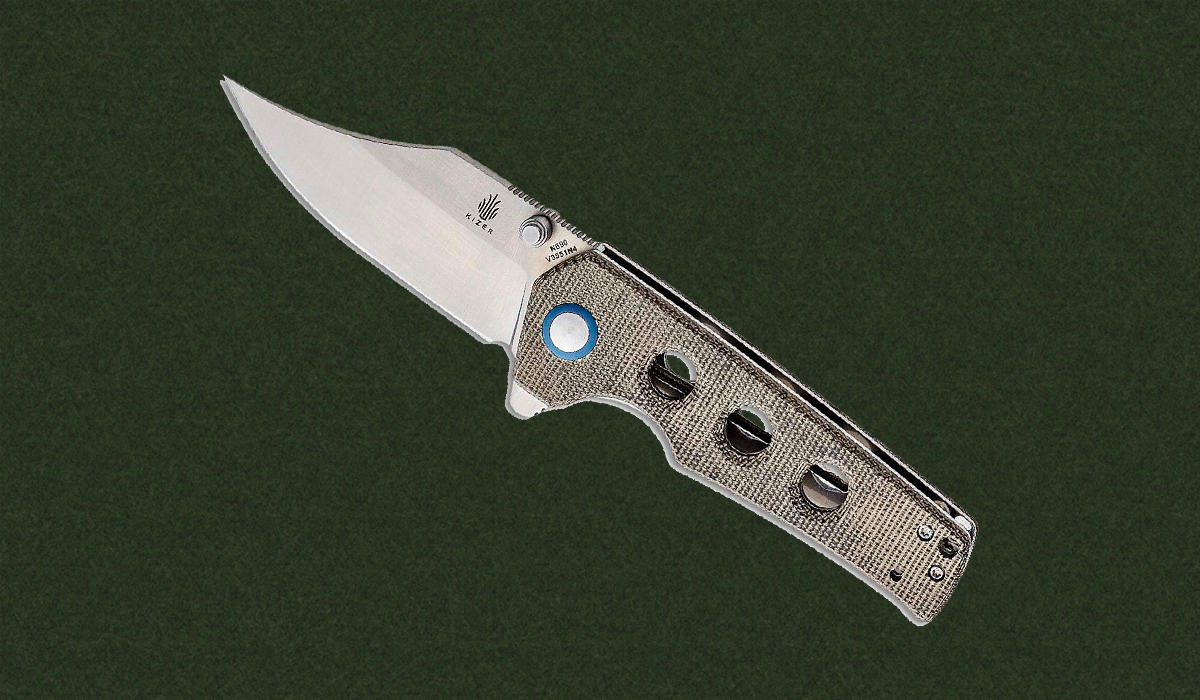 A compact counterpoint to the Adamas

It’s the smallest blade on our list, but the recently launched Kizer Vanguard Elstner Junges (designed by Carlos Elstner) is built in a similar vein to the Benchmade Adamas, and could be a solid contender for your next backpacking knife is something a bit more compact is on your radar. Open Micarta scales make it a bit of a featherlight in the category, and its Bohler N690 Bowie style blade ensure easy slicing. It also comes in as one of the most affordable blades in our list, and its 3-inch blade length make it the kind of thing that could be carried day-to-day as well as on light backpacking trips. 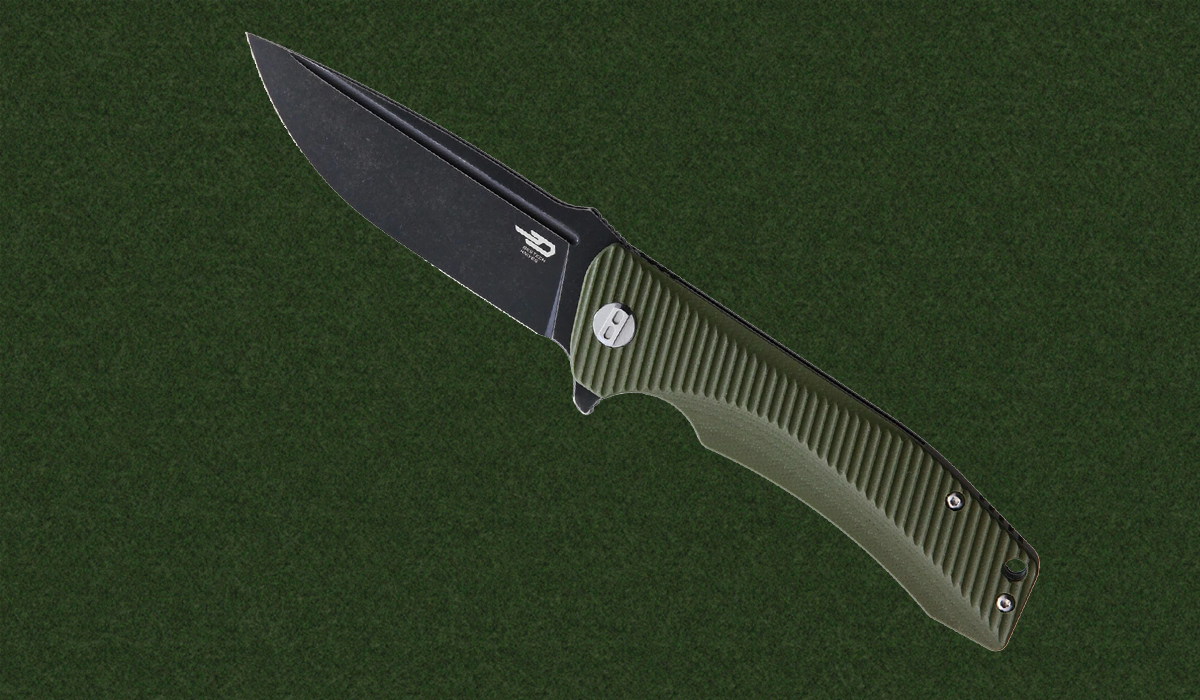 One last big affordable knife to close it out

Another go-to manufacturer for a lot of knife designers incapable of producing everything in-house, Bestech offers a wide range of knives in a variety of price points. If nothing else, one thing is consistent; the value proposition of any Bestech knife is pretty much on point. In the case of the Mako, which comes in just under $70, you get a big 3.75-inch drop point blade in stonewashed D2 steel, and nicely contoured green G-10 scales with a nicely milled texture to them for added grip. If we’re going to be picky, the stainless steel deep-carry pocket clip should have been stonewashed as well, but at this price (and for something utility focused) we’ll let it slide.

Bottom Line/Big blade on a budget, comparable to the Civivi and Kizer offerings

What makes a good backpacking knife?

This is a bit of a tricky subject in some respects. Weight, size, and blade shape tend to come first, as you want something that’s well suited to the task. If it’s a big folding knife built specifically for your backpacking trips, edge retention isn’t absolutely paramount assuming that you’ll have time and opportunity to hone/sharpen your blade during the gaps between usage. Grip is also a key consideration, as it is a tool that you’ll potentially be using out in the elements.

Again, this is a bit of a variable, but I lean towards something in either a flat or hollow grind, but not full flat or high flat in most cases. The reason behind this is that you want something with more of a wedge rather than a thin slicer, in order to be able to take on more heavy duty tasks, whether cutting back brush or otherwise. That said, depending on your climate that may not be necessary and the right choices need to be made accordingly.

Why are there no fixed blades in this list?

It’s not to say that a fixed blade can’t be one of the best backpacking knives around, but the decision was twofold. On one hand, there’s the weight consideration that will always come with backpacking, and on the other, even if the weight is less of a concern, if you’re hiking trails and dealing with elevation, having a fixed blade on your belt will be more cumbersome than a folder that can safely tuck into a pocket.

As OutdoorHub’s new resident knife expert, Justin Mastine-Frost brings a wealth of knowledge to a very specific niche of the site. While not as outdoorsy or well-seasoned in hunting and fishing, Justin is very well versed when it comes to the world of engineering and manufacturing, as well as being an avid knife collector. Coming at the category with a background in automotive, powersports, and watchmaking (an eclectic mix, we know), he has rapidly built up a knowledge base of the category. Aside from overall knife design, he knows that the devil is in the details—ergonomics, type and hardness of steel, bearing materials, and other key details will all play into the evaluation of each knife presented on OutdoorHub, alongside both value and intended use. Whether you’re looking for a substantial field knife for dressing and gutting, or a small pocket folder for daily carry, he’ll do his best to steer you in the right direction.