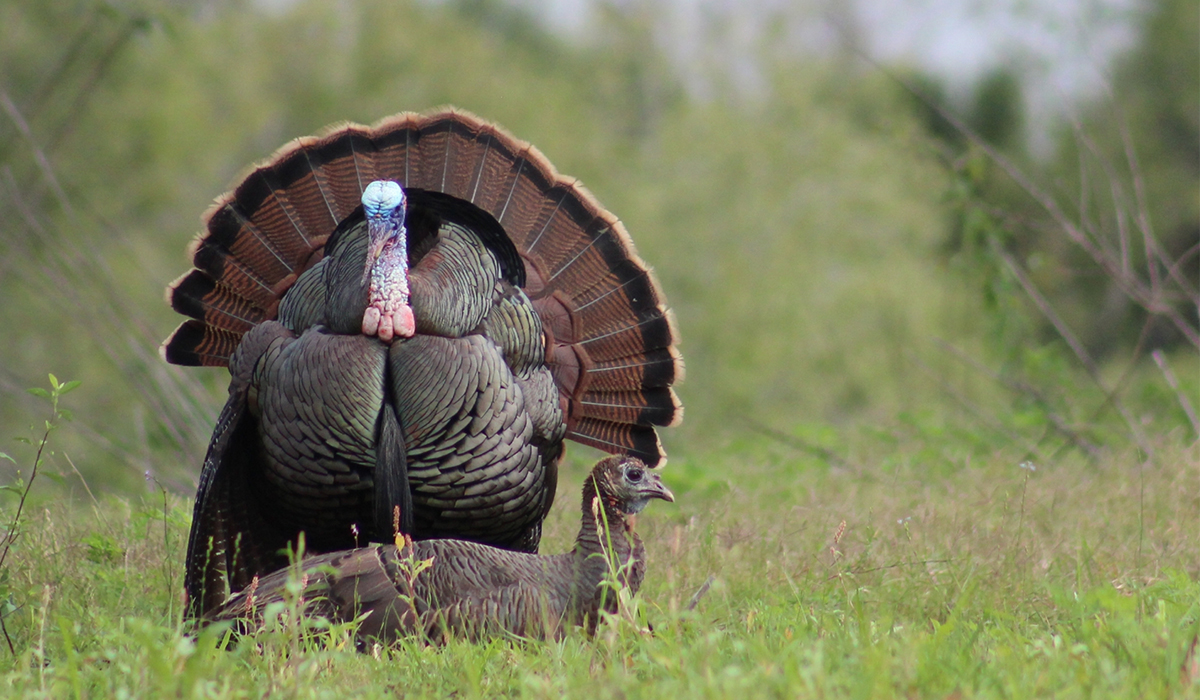 It’s no secret that decoys can help bring turkeys to you when you’re hunting. Decoys are getting better every year and help fool those big toms and, even more importantly, those weary old hens that are often the cause of a busted hunt. Hens have excellent vision and aren’t all caught up with trying to find the love like toms are. Decoy carvers are always working overtime to bring the most lifelike creations to the market. Why does that matter to you? Because sometimes you really do need the best turkey decoys to draw in the birds. 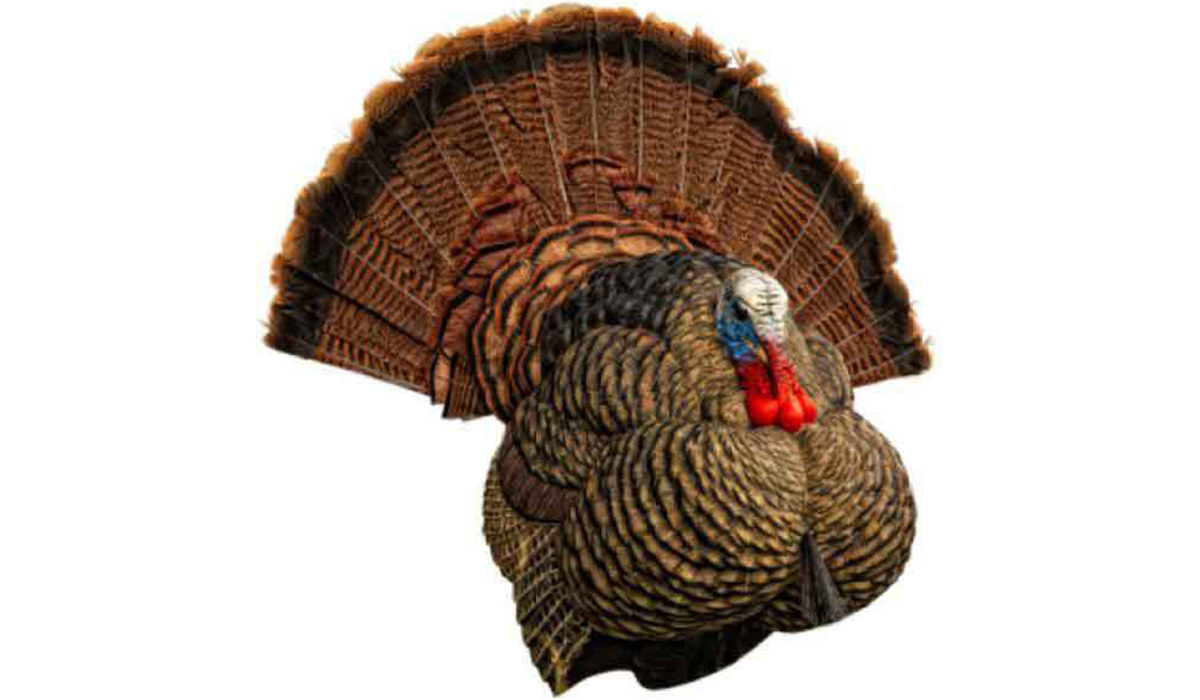 A great strutter posed decoy to deploy when you need it

The Avian-X Strutter is one of my more-recent favorite decoys. It’s easy to move around and is highly lifelike, making it easy to really tick off a tom. It’s collapsible, and comes with a stake and carry bag. Better still, it’s 15-percent smaller than a real turkey, making it more portable, and to help add a little depth to your spread. And typical for Avian-X decoys, it looks good – Really good, in fact.

Cons/Harder to deploy in a hurry 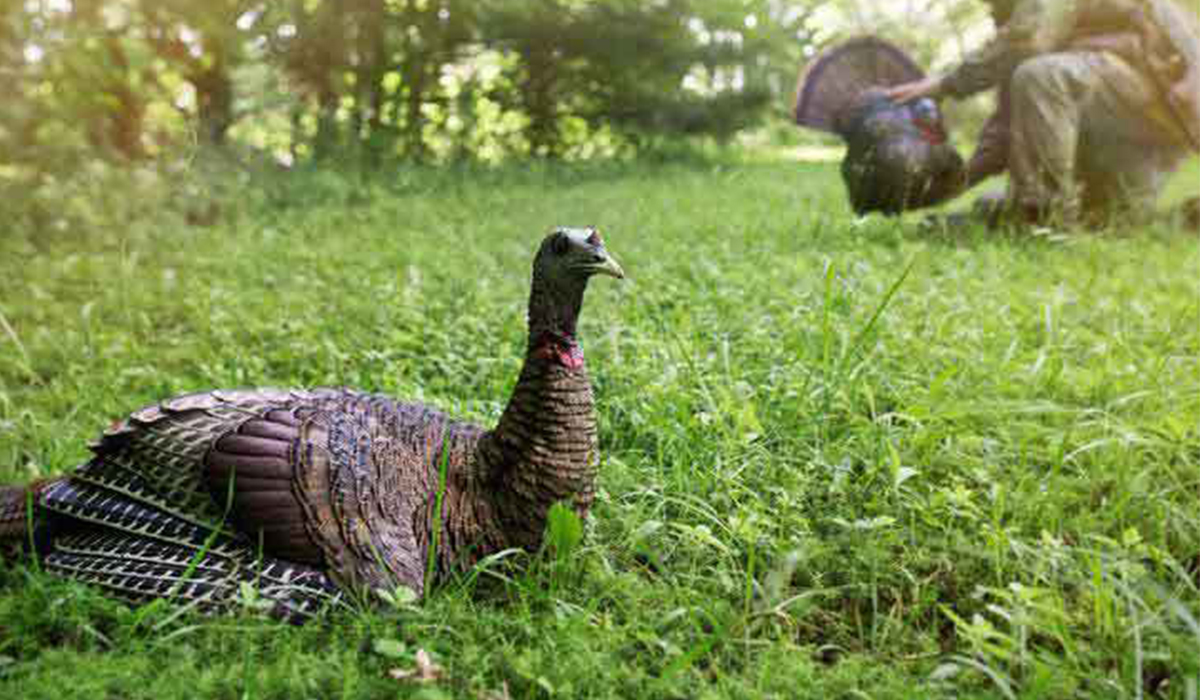 The laydown hen replicates a hen turkey that is ready to mate. You place this in close proximity to a tom or jake decoy and expect a very angry tom to come running in to spoil the mood. It is one of the most effective decoys you can put out and always seems to get a response when we use it. Detail is typical Avian-X – outstanding, and the collapsible body makes it easy to transport. One of the best all-around decoys, and especially effective in tough hunting conditions.

Cons/You’ll wish you had one years ago

Bottom Line/The one decoy you need, especially for tough conditions. 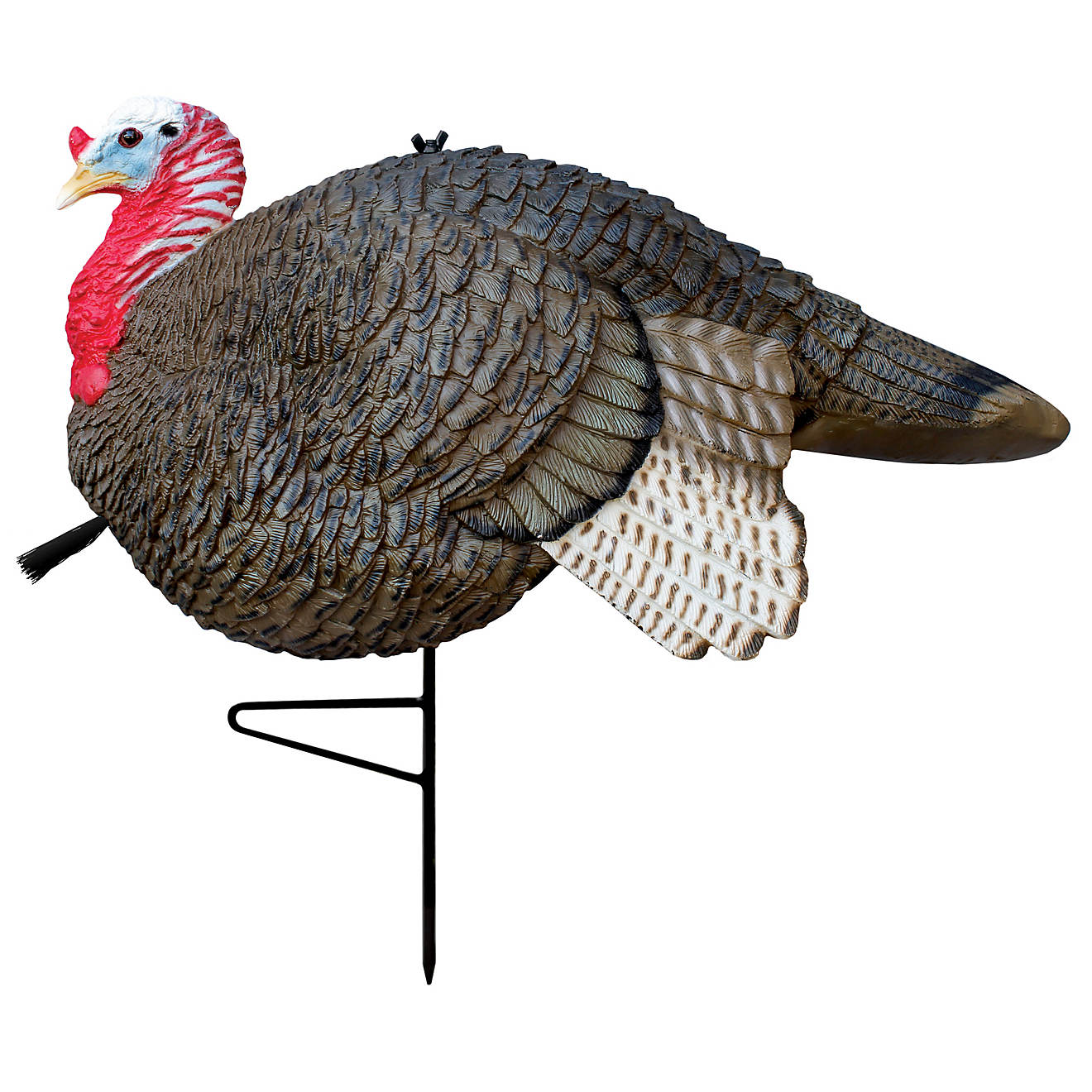 The Primos Gobblestopper Jake is a great decoy to have at your disposal. Its submissive, 1/4-strut posture works to draw toms in from any distance. The incoming bird sees the hen decoy and then sees the jake being somewhat submissive to the tom’s gobbles. To the tom, that means it’s well past time he got over there and showed the youngster a thing or two. This decoy helps fool toms with a realistic shape, with great detail and a paint job that matches. The body easily compresses and folds for carrying and it comes with a stake to pose it just right. 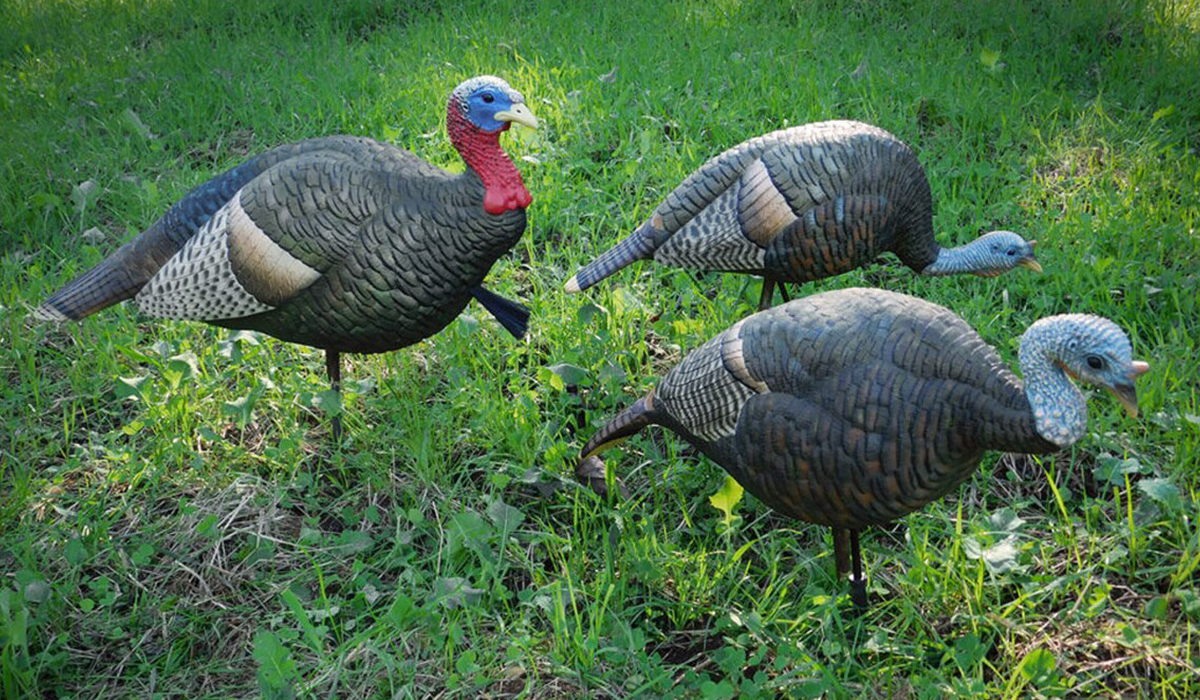 The Grind’s Bugging Hen decoy is a feeder decoy that adds realism and simulates movement within your decoys. Being a feeder, this decoy also helps to creates a sense of calm and safety to a tom, which helps you out greatly. We all know that a hen is usually the first bird to bust you, and any turkey hunter who has spent much time chasing birds has seen it first hand. This decoy not only works to bring in the toms, but also helps to calm any live hens in the area who might be coming in to your calls as well. Like other decoys, this one is durable and easily portable, too.

Pros/A pose you may not have seen before, which means your birds probably haven’t seen it either 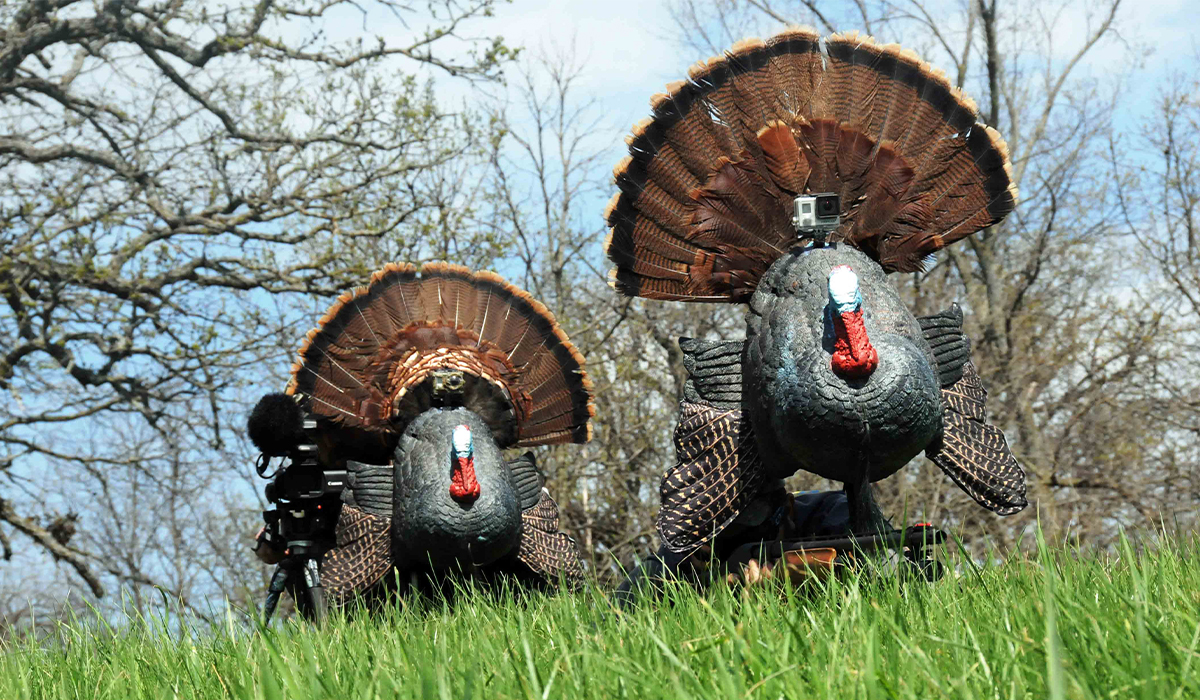 Mojo decoys has designed the perfect decoy for those that like turkey reaping as the preferred method for bringing home a tom. This is a full-strut tom decoy that is designed for you to creep toward a live bird. It is a perfect way to hunt a hened up tom that won’t respond to your calls. You position yourself behind the decoy and start moving toward the birds. This can often cause one of two main responses. either the tome will get in front of the hens and stand its ground, or it will come charging across the challenge the interloper, only to rush into a face full of lead. If you want a cool filming experience, get two decoys and have a buddy run a camera, like in the picture above. This is a high-quality decoy, with specially positioned orange reflective panels to let another hunter know what’s going one.

Cons/Crawling can be hard on the knees, so dress accordingly

Bottom Line/A lot of fun you need to try.

When to decoy and when not to decoy

Never be afraid to move your decoys around during the hunt. I’ve been known to hurry up and reposition my decoys when the goggles are coming from a direction I wasn’t expecting. I’ve had luck positioning them behind me and I’ve had luck pulling them entirely and running no decoys. That’s a trick I picked up from a world-renowned caller, who never uses decoys. He says that once the live bird finds your decoys, the calls you’re making better match what the decoys are doing precisely. He suggests pulling them and making the incoming tom keep searching for the birds. I’ve had that work, but I’ve also had it blow up in my face. That was mostly due to the fact that I’m not a world-renowned master turkey caller.

You need at least one decoy in your bag of tricks come turkey season. I won’t hunt without at least two, a jake and a hen. If I’m hunting from a set blind, I’ll usually have at least a strutter decoy and another hen with me.I like to be ready to throw everything but the kitchen sink at them when I’m hunting.

I’ve seen some of the electronic motion turkey decoys and have tried a couple out when not hunting. Using them in season isn’t legal where I live. Check your local regulations on use before you spend the money, but they can be highly effective at drawing birds in, especially from a distance.

My favorite way to add motion is to use a fan decoy and move it around myself. This puts you in the mix, and if you’ve seen any of those videos of guys blasting turkeys as they come charging into the fan, you know what I mean. A fan decoy can also save you when a tom’s attention starts to fall away from your decoys, or your calling. We had one nice tom working our setup, only to have a pair of hens pop up on the other side of us. The tom started heading their way, so I whipped out the gobble call and the fan, and he came running, looking for a fight. He was left flopping to a facefull of #6s.

Are decoys enough, or do I need to call turkeys in, too?

Calling is probably more important than decoys, so at least know how to make a few basic turkey sounds before you hunt. Don’t worry, though. Many turkey calls are easy to master with a little practice.

What about using a mounted turkey as a decoy?

Mounted birds work great as decoys as long as it is legal in your state. Some states do not allow them. Plus, a mounted bird is harder to carry in and costs much more than regualr decoys.

Can I use electronic, motion decoys for turkey hunting?

Check your state regulations about this and all of the laws pertaining to your hunt BEFORE you go into the field. A CO will not let you off the hook because you didn’t check. It’s your responsibility.

Derrek Sigler has been a professional outdoor writer for more than two decades since earning his Master’s Degree in creative writing with a thesis about fishing humor. But if you ask anyone that knows him, he’s been telling fishin’ stories since he was old enough to hold a pole. He has written for Cabela’s and served as editorial director for Gun Digest books. Over the years, he has also written for Petersen’s Hunting, North American Whitetail Magazine, Wildfowl, Grand View Media, and has worked with Bass Pro Shops, Hard Core Brands and Bone Collector. Successful Farming had him write for their magazine and he has appeared on their TV show to discuss hunting and ATVs on multiple occasions. He writes about the things he loves – hunting, fishing, camping, trucks, ATVs, boating, snowmobiles and the outdoor lifestyle he enjoys with his family in their home state of Michigan and more as they adventure around North America.