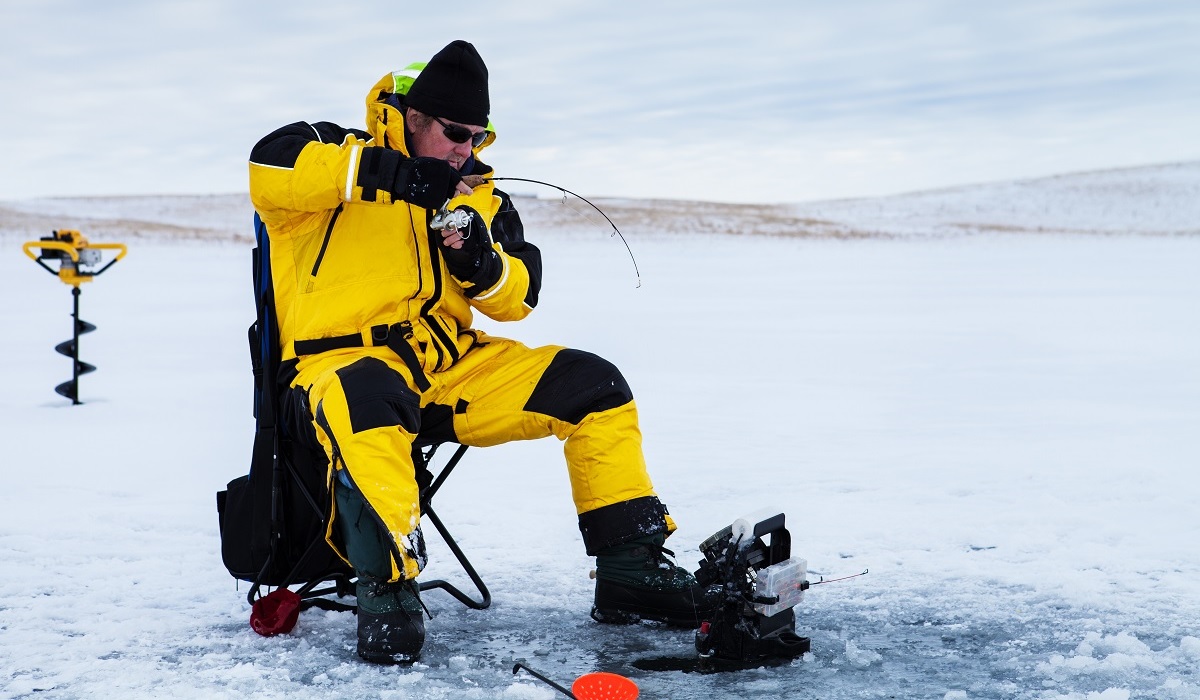 By now, we’re all steadily anticipating pulling the boats back out and dreaming of sunny days on the water. However, there’s still plenty of good days left chasing fish on the hard water. Here’s a few tips that have worked well for us over the years for late season ice fishing tactics for big fish. 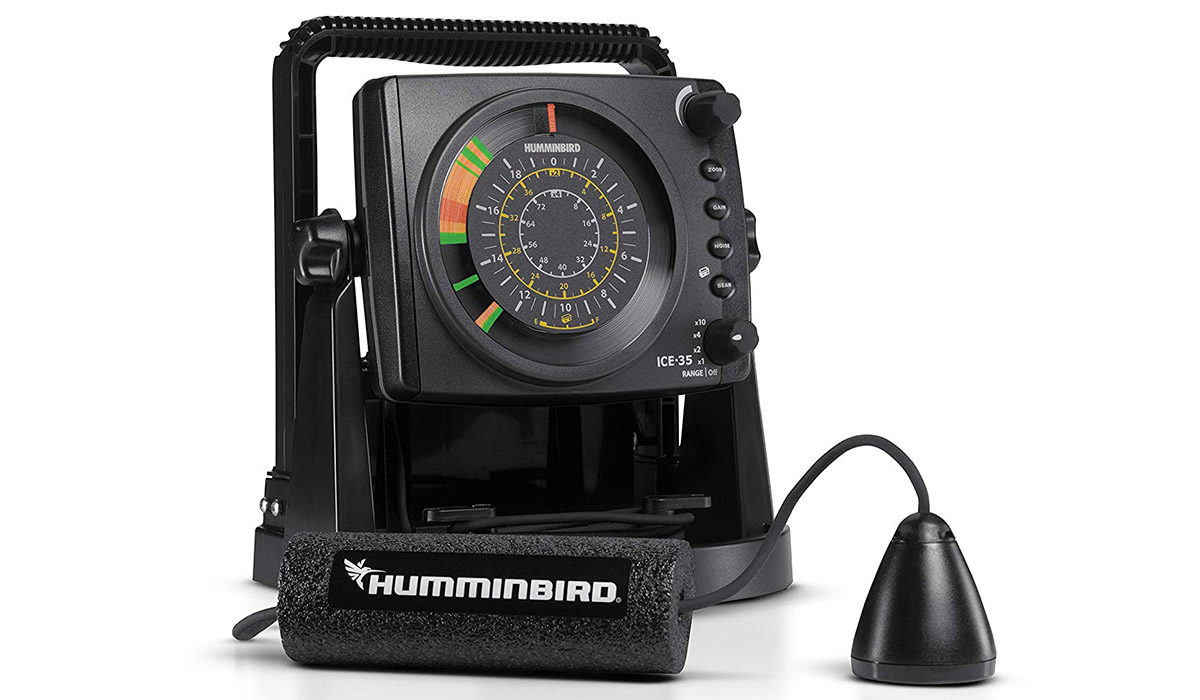 You need to be on the fish. There are lots of electronics for fishing, but when it comes to fishing on the ice, it’s hard to beat a flasher. If you’ve never used a flasher, they are very user friendly and easy to get used to using. It’s a super easy and quick way to find out if what you’re doing is working. There are a lot of them on the market. Big names like Vexlar and marcum have multiple models to choose from. Humminbird has their own line, as well as GPS-enabled fish finders that transfer from your boat to the ice. Pick the one that best suits your budget and needs.

Late season fish tend to move with the oxygen. Deep water is usually lower in oxygen, and the immediate layer at the surface is poor as well, as the temperature affects the density. Look for those mid-level humps and holes that will hold fish later in the year. A good map of the lake, if you don’t know it, will help. Drill a lot of holes to find these spots and the fish. I tried an 8-inch K-Drill a couple years back and have been sold on them ever since. They are lighter and drill holes super fast using my cordless drill. Other auger types include gas, propane and electric. Other brands have auger drill bits, too. The key thing to keep in mind here is that you’ll have to be prepared to drill a lot of holes in order to get on the fish, and the ice will generally be thicker and denser later in the season. if you go with an electric drill, like an auger bit, or one of the new battery driven augers, make sure you take a fully charged battery and have a spare with you, too. With a gas-powered auger, I always liked starting it up every 30 minutes or so, just to keep it easier to get going when I needed to move to stay on the fish.

When I start out the ice season, I use a lot of smaller jigs and smaller bait. By the later stages of the ice season, I’m using much bigger baits. I fished a few years back with a guy who, during the rest of the year, fished the pro walleye tour. On the ice, he got me using larger bait later in the season. We fished right next to a group of guys jigging teardrops tipped with small minnows, and we were pulling in Extremely nice fish using baits that were at least 50% larger than they were.

If the fish are hitting jigs, go to a size 7 or 9 Rapala. Going to a bigger size works because late season fish are often pretty hungry. Presenting them with larger baits helps entice the strike. If you’re running tip ups, let the fish run longer than normal, too. Big walleyes like big minnows. They’ll hit them, run a ways. Stop and then run a little more before starting to swallow the bait. That’s when you set the hook.

One tactic that has proven to work quite well for big pike late in the season is to use a dead or almost dead minnow. This strategy seems to work best for us when we know the structure that is underneath us. A nice drop-off works well.

In the late season, there is a natural die-off of fish, usually due to stress and water oxygen levels. You can either jig a dead one, or run it under a tip up. Yes, a tip up with a dead minnow. The first time I ever tried it, it was out of desperation. All the pike minnows died on the way to the lake. So, do you not fish, or try it anyway? Of course we fished. We just set the tip up line a little higher in the water than normal and hoped for the best. We ended up chasing quite a few flags. Now, we always bring a couple dead ones late in the season and set at least one dead-head tip-up. We used some bigger minnows, and since they are dead, it’s ok to run a stinger hook right in the tail.

Running a tip up and a jigging rod are great ways to cover a lot of water in search of bigger fish. One pro I fished with year back liked to run a rod and a couple tip ups until he got on the fish. He’d then switch over to all tip ups so he could spend more time targeting the bigger fish, which almost always hit exclusively on the tip-ups.

Looking for information on the basics of ice fishing gear? Outdoor Hub has you covered!

One thing to consider is ice thickness. Even with the thickest ice, changes in barometric pressure, like right before a weather system moves in, will affect fishing. We often see some really big storms roll through late in the winter cycle, and these storm fronts can cause big swings in fish activity. Thicker ice can, however, have a harsher impact on the ecology of the lake. With thicker ice, less light penetrates, which can affect everything going on under the surface. Another key factor is oxygen level. O2 in the water impacts how the water sits, and turnover, which impacts where the most oxygen is in the water. The thing is, some lakes can have a severe oxygen depletion in winter, as the plant life isn’t producing anymore and decay from winter die-off pulls oxygen out of the water and in turn, kills the fish. It is always good to call for lake and fishing conditions if you can. Keep an ear out for tips on hot spots on social media and from your buddies and neighbors.

Derrek Sigler has been a professional outdoor writer for more than two decades since earning his Master’s Degree in creative writing with a thesis about fishing humor. But if you ask anyone that knows him, he’s been telling fishin’ stories since he was old enough to hold a pole. He has written for Cabela’s and served as editorial director for Gun Digest books. Over the years, he has also written for Petersen’s Hunting, North American Whitetail Magazine, Wildfowl, Grand View Media, and has worked with Bass Pro Shops, Hard Core Brands and Bone Collector. Successful Farming had him write for their magazine and he has appeared on their TV show to discuss hunting and ATVs on multiple occasions. He writes about the things he loves – hunting, fishing, camping, trucks, ATVs, boating, snowmobiles and the outdoor lifestyle he enjoys with his family in their home state of Michigan and more as they adventure around North America.