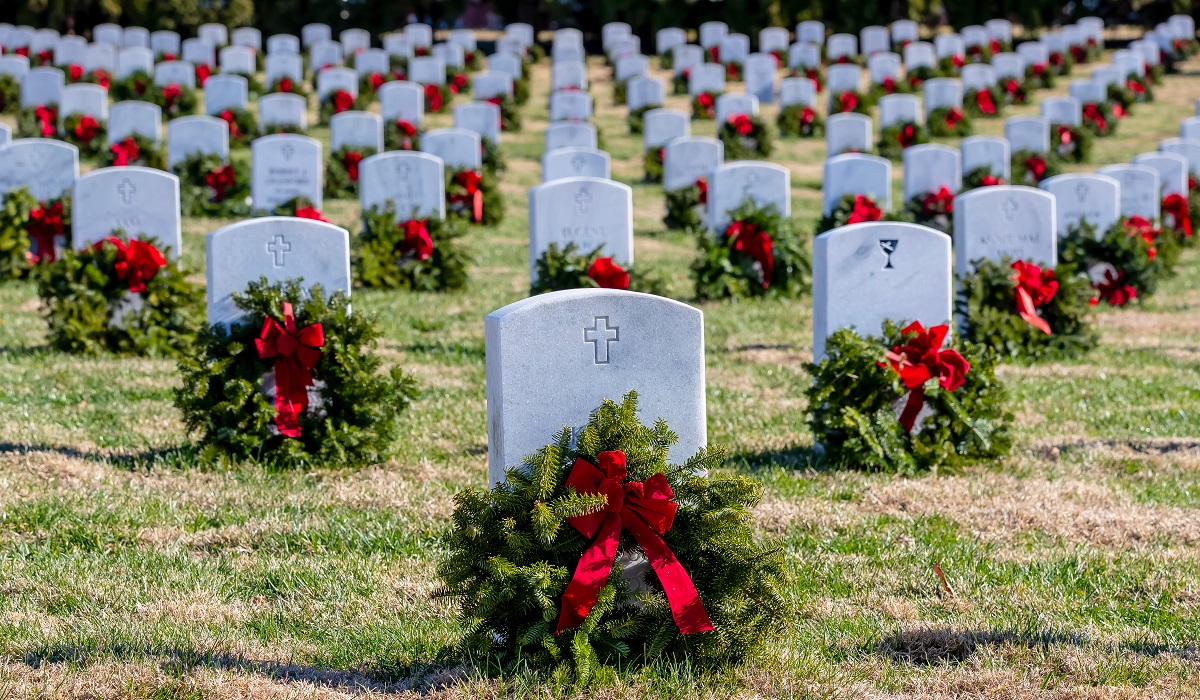 Each year, Christmas wreaths are placed at the graves of fallen heroes in the National Cemetery in Grafton, West Virginia. What happens to them at the end of the holiday season? In previous years, the wreaths would simply be thrown away, but members of the West Virginia BASS Nation fishing organization recently came up with a way to use the circle-shaped decorations to start a little conservation project.

Instead of just throwing them all away, the group began repurposing the wreaths by turning them into giant fish homes and placing them in Tygart Lake.

“The wreaths got thrown away after they were taken off the graves,” said Harman to West Virginia Metro News’ Chris Lawrence. “Rather than having to pay to have them thrown away. We thought why not see if we could make them into some fish habitat. And it’s evolved from there,” he explained.

Conservation Director of W. Va BASS Nation, Jerod Harman, said the group started the recycling effort in 2019. In a Facebook post, Harman wrote the group collected more than 5,000 wreaths last year and will likely have right around the same number again in 2021.

“I think it’s pretty amazing that a young boy or girl may catch their first fish this year on the habitat we placed, and it was all because of soldier[s] [who] gave all for our freedoms. May God Bless America! Harmon wrote on Facebook. He also made sure to thank everyone who came out to help gather, transport and install the wreaths in place in Tygart Lake.

BASS Nation of West Virginia also posted on Facebook, thanking Mr. Harman and everybody who was involved for their efforts. The group wrote: “Thank you” to our Conservation Director Jerod Harman and to all others who assisted in this awesome & worthwhile project! BNWV Conservation.. improving conditions for ALL anglers!”

Harman went on to explain how the wreaths were placed in the lake, and some of the challenges they faced early on;

“During the 2019 effort wreaths were assembled on PVC pipes connected and anchored with cinder blocks in rows along the lake bottom. The idea was to arrange them so the pipes could be disconnected and new wreaths added in future years.” This is where Harman and his team would run into some obstacles.

“If the lakebed isn’t frozen it gets really mucky. Last year we had a heck of a time walking around out there and trying to get things placed. We thought if we could find a way to place those with a piece of equipment, rather than walking around, it would be a lot easier,” he stated.

And that’s exactly what this year’s game plan entailed. The group of workers went back to the drawing board and formulated a plan that mirrors Harman’s imagination.

The new arrangement is an old wooden pallet with a pipe frame attached. The wreaths are threaded onto the pipes to resemble the shape of a cube. The pallets made it simple to load, unload, and place the cubes using a tractor with a fork.

Harman said their new method allowed for the pallets and frames to be assembled ahead of time so the cube can literally be built at the cemetery, then simply unloaded at the lake with a machine. It makes for less work, less time, and officials are hoping to potentially expand the program to other lakes in the region.

“It’s going to continue to get bigger. We’re going to do more expanding, but it takes more people and it take money,” he said.

Harman encouraged people to donate to the Wreathes Across America program which is responsible for placing the wreaths on each veteran’s grave. BASS Nation covered the cost of materials and volunteers and Division of Natural Resources personnel provided the labor.