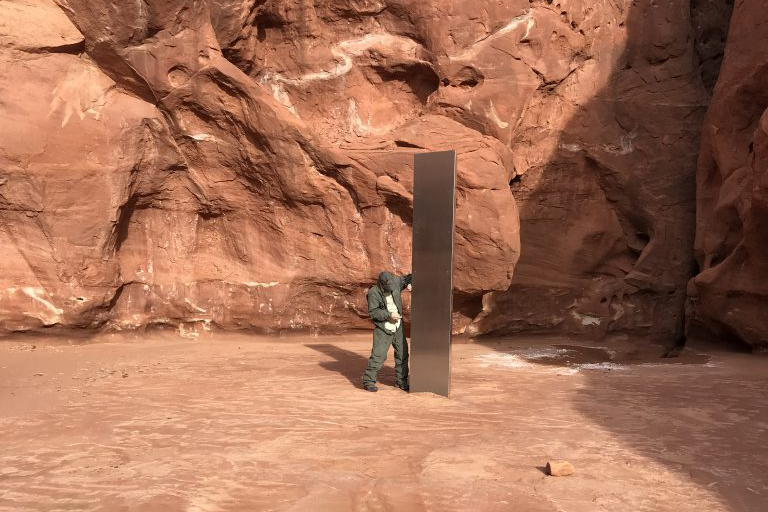 From the inspiring to the tragic, ‘Adventure News of the Week’ presents a wrap-up of top news in the world of exploration and adventure.

NEWS: Mysterious Monolith in Utah Disappears. A mysterious, “space junk”-esque metal monument has disappeared from the middle of the Utah desert as quickly as it was discovered.

The monolith showed up on satellite imagery and took the world by storm after members of the Utah Department of Public Safety discovered it last week. The BLM agency in Utah reported that they did not remove the structure, but someone else did on Friday, Nov. 27.

RUN: Kilian Jornet Ends 24-Hour Record Attempt in Hospital. Accomplished ultrarunner Kilian Jornet began the attempt to hopefully beat the current record of Yiannis Kouros’ 303 km in 24 hours. He dropped out after a little under 11 hours.

He experienced sharp pains in his chest and eventually sought medical attention, Jornet wrote in an Instagram post.

Moro and Txikon to Climb Manaslu in Winter: Two mountaineers dubbed “The Lords of Winter” by the Italian media, Simone Moro and Alex Txikon, just announced they will attempt a rare winter summit of the 8,000m peak Manaslu. At this time, they’re the only team expected to tackle the exceptionally difficult, dangerous ascent this winter.

Both organizations are working with leaders of the Nulhegan Band of the Coosuk Abenaki Nation to develop greater access in the area for the Abenaki People. The easement will “allow for certain recreational, cultural, and educational uses; the procurement of foods, materials, and medicines; and other traditional activities.”

GEAR: Gearo Launches First Worldwide Gear Rental Pass. Gearo, an online outdoor gear marketplace, has created a gear rental pass that works in its network of 200-plus outdoor retailers and 75-plus cities. The pass gives customers an affordable way to access thousands of rental products in categories like ski, snowboarding, biking, kayaking, camping, and more.

Depending on your interests, there are three different passes with different rental perks available. Passes start at $33 per month, and you can view Gearo’s network or buy a pass here.

The recall impacts about 3,000 mountain bikes in the U.S. and Canada. Read more…